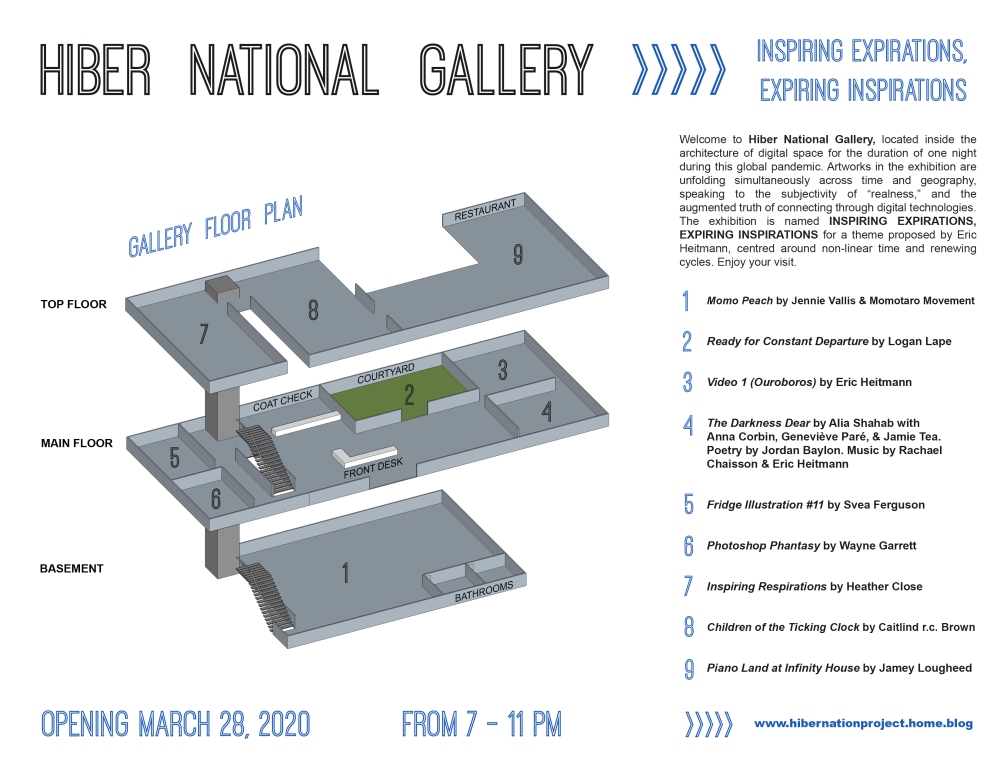 Screenshots and video were captured by Heather Close, Nikki Tambourine, Logan Lape, and Caitlind Brown. Thanks to everyone who helped document the evening! Last Saturday night, we invited audiences to join us at Hiber National Gallery. Using a free video sharing app to create different “rooms” in an imaginary gallery located in digital space, artists and musicians created performances, installations, and sculptures for viewers to experience at their own pace, as if choosing their course through an exhibition. Using digital space as the architecture for an imaginary gallery, viewers entered the gallery’s “atrium” and were directed to different “rooms” via the switchboard operator at the “front desk.” 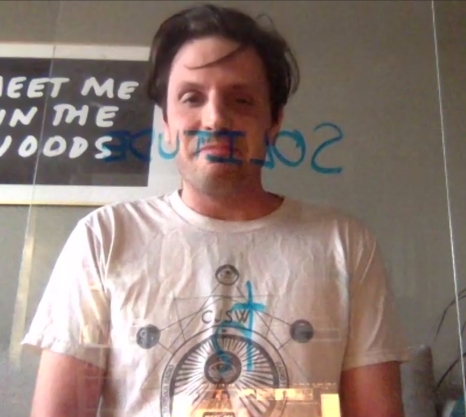 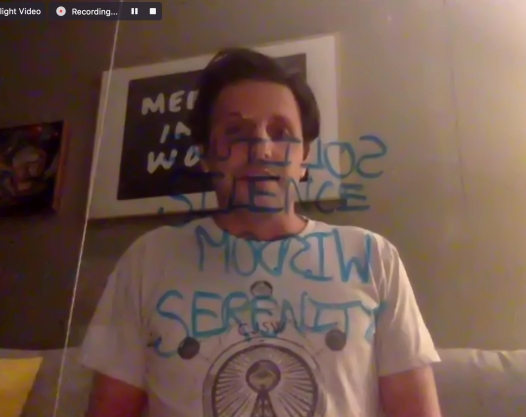 Eric Heitmann began and ended the evening with cyclical performances, titled “Saturn’s Advice for Isolation,” (seen above at 7 and 11 pm). 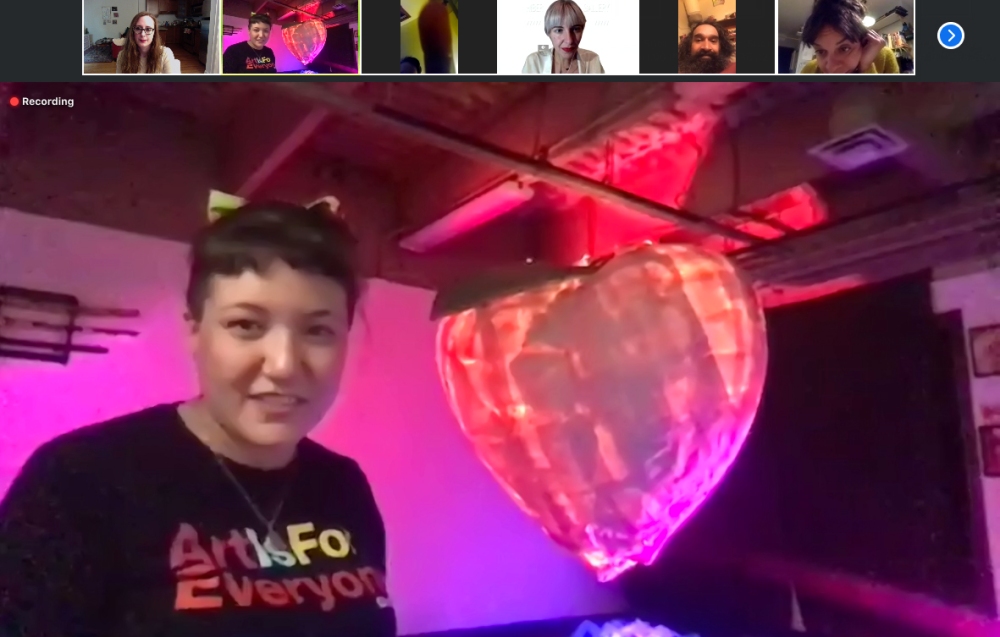 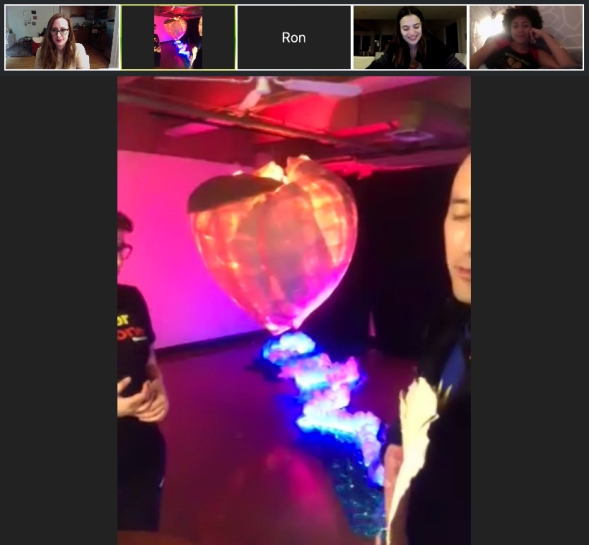 As described by Jennie Vallis, “in Japanese folklore there is a story of a peach, floating down the river and an old couple who never had any children find the peach and cut it open to find a boy inside. The boy is named Momotaro (Peachboy) and they raise the boy as their own son. He grows up strong, like a warrior and is ready to help his town fight the the ogres. Momotaro’s parents are poor and can only provide him gyoza (dumplings) to send him on his quest. Upon his adventure, he comes across a monkey, a dog and a bird who offer to accompany him in exchange for gyoza. It is only with the power of teamwork that Momotaro will be able to defeat the ogres, by himself it would be impossible!”

In Room 2, the courtyard of the gallery, we find an installation by Logan Lape titled “Ready for Constant Departure.”

A small orange flag rotated atop a record player, balanced on top of a collection of faintly campy furniture. Interested in pre-apocalyptic aesthetics at the best of time, Logan Lape built this installation in his car port while self-isolating (like the rest of us) during the Coronavirus pandemic.

In Room 3, Eric Heitmann shared his trilingual video work “Video 1 (Ouroboros).” An exploration of the the colonial structures of language, Eric performed in English, Spanish, and German. 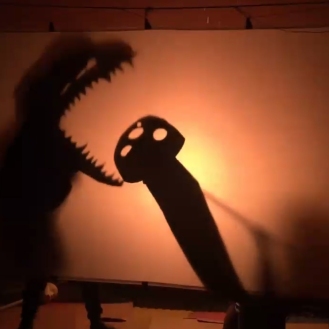 Room 4 held “The Darkness Dear,” video documentation of a fire-lit shadow performance originally conceived for The Dark That Eats Itself, a Hibernation theme from 2019. Rescheduled due to cruel winter weather, the performance is an invocation of the darkness and an exorcism of the all consuming light. 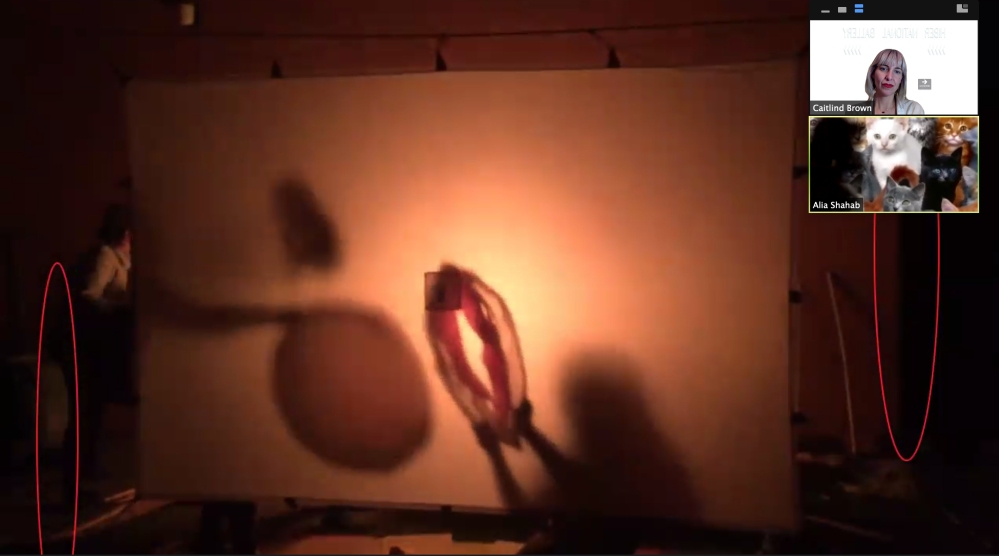 Featuring visuals by Alia Shahab, Anna Corbin, Genevieve Pare, and Jamie Tea, the performance was layered on top of poetry by Jordan Baylon, and music by Rachael Chaisson and Eric Heitmann. 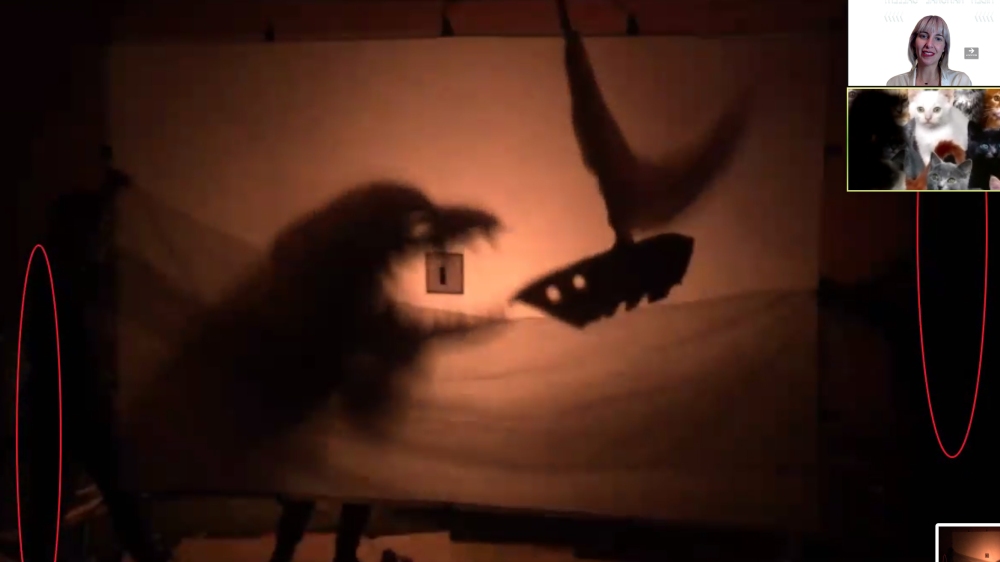 Viewers were invited to submit suggestions and images that Wayne live photoshopped into strange and hilarious scenes. 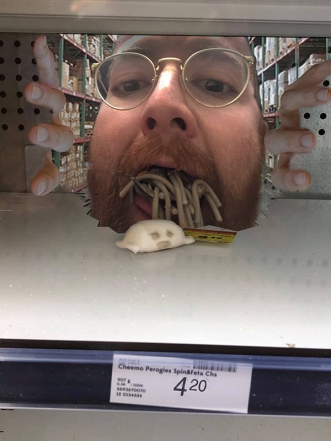 The first exhibition room on the top floor of Hiber National Gallery was “Inspiring Respirations” by Heather Close.

Room 8 of the exhibition held “Children of the Ticking Clock” by Caitlind r.c. Brown. A combination of objects caught in melting ice, candles burning at both ends, a slowly rotating disco ball, and a miniature house (modelled after a demolished building, designed by Caitlind & Wayne and fabricated for Flyby Sky Rise by Carvel Creative) “Children of the Ticking Clock” spoke to domesticity and radical changes in state.

In the 9th and final room of Hiber National Gallery, igniting the Four Star Restaurant of the cultural institution, was Jamey Lougheed with “Piano Land at Infinity House.” 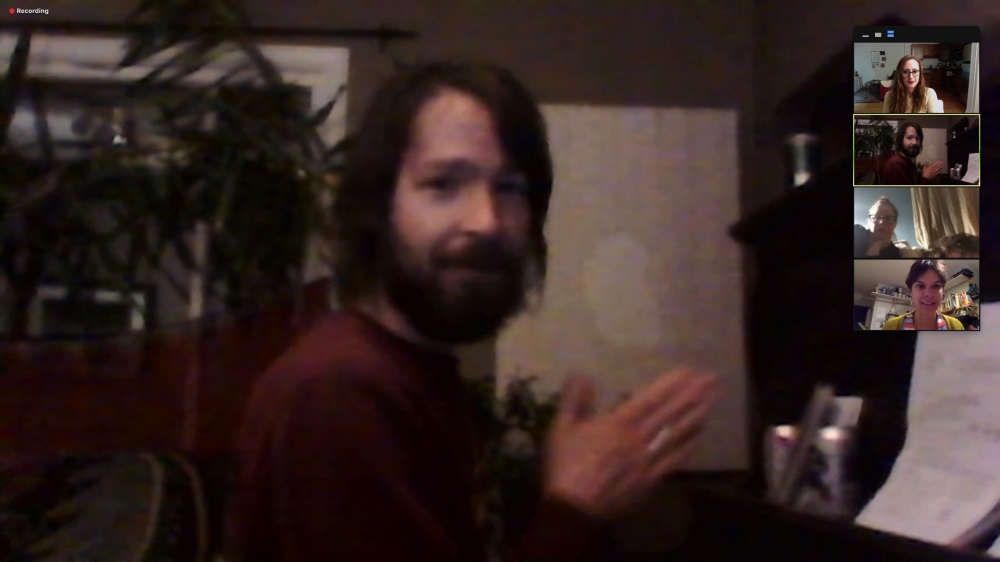 Viewers tuned in to almost 4 hours of Jamey tickling the keys to any number of Grateful Dead melodies, a soundtrack to the Gallery Opening. 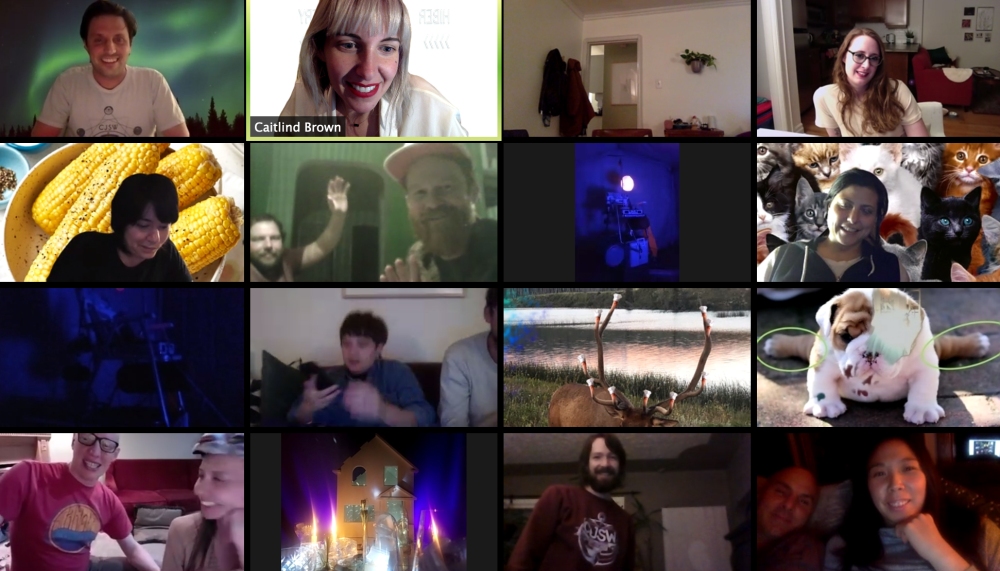 Intended to speak to the subjectivity of “realness,” and the augmented truth of connecting “face-to-face” through digital technologies, this week’s Hibernation is the second last in our 12 week series. Thank you to all the viewers that attended the gallery, and to the artists that created our first and only exhibition! Intended to speak to the subjectivity of realness and the augmented truth of connecting through digital technologies, the first (and only) Opening at Hiber National Gallery attempted to create an analog for gathering in physical space.
Thank you to the amazing artists

❤ and everyone who visited the Hiber National Gallery.